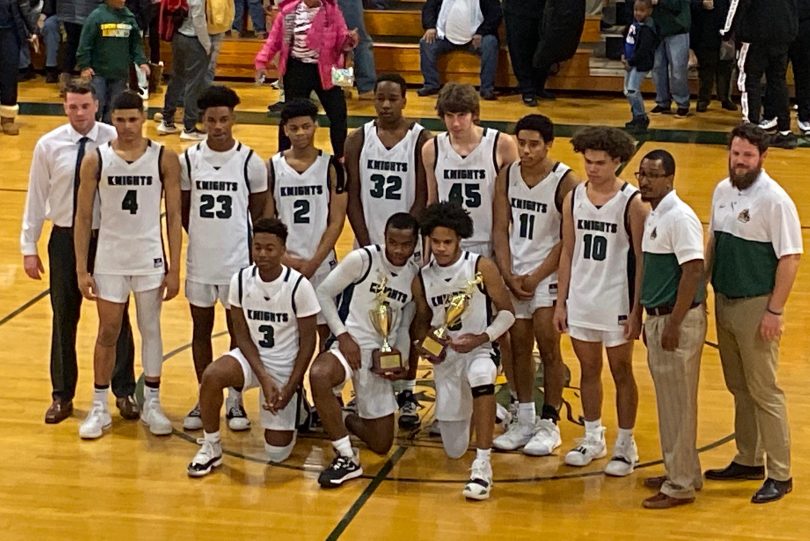 Predictably, Goochland and Buckingham got the rubber match that their regular season series demanded in the James River District championship game Saturday night.

The familiarity with one another showed in the score in the third clash and Buckingham gutted out a 46-37 win in a low-scoring tussle to take home the James River District tournament championship to take home the district title for the first time in seven years.

Amari Toney led the Knights (21-3)  with 13 points while Tae Toney finished just a free throw short of a double double with nine points and 10 boards. Xavier Copeland and James DeVore each chipped in eight for the Knights.

Goochland (18-5) managed to take the lead early on and the Bulldogs were up 21-16 at the break. But Buckingham got moving in the third and at the end of that frame, they were up 30-27. Goochland responded with a quick 6-0 spurt to start the fourth, taking a 33-30 lead but the Knights eventually answered again, surging ahead 38-37 with 2:29 to play and holding on from there for the win.

Quincy Snead finished with 20 points for the Bulldogs, notching the majority of the Bulldogs’ points.

Snead and the Knights’ Tae Toney were named the co-James River District players of the year. Both the Knights and Bulldogs went 14-2 in the regular season in the district.

Buckingham will host the first round of the Region 2B playoffs February 25 at 7 p.m., opponent currently to be determined. The Bulldogs will play in the Region 3B playoffs starting the same night.

While it’s best for Covenant boys basketball when Jonas Sanker is just lighting it up on...