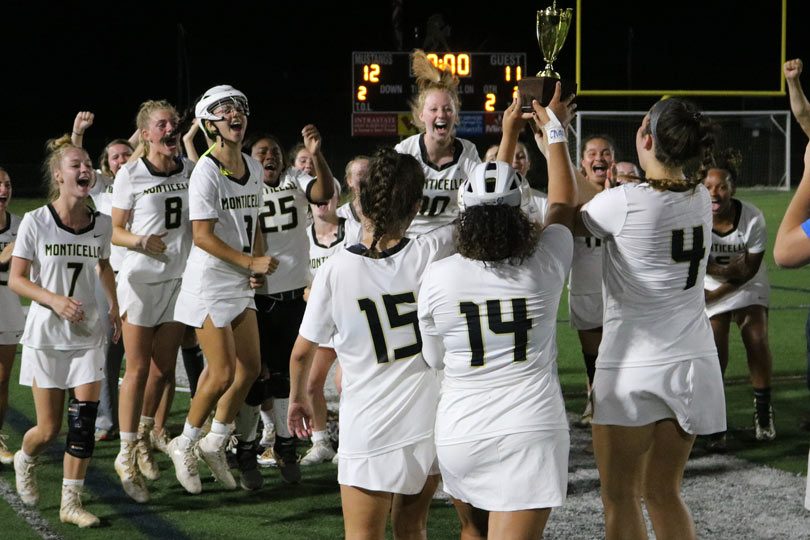 Monticello girls lacrosse’s Meghan Walin was feeling it. Whatever the zone actually is, she was in it already during warm-ups for the Region 4A title match with Western Albemarle.

“I just had a really good feeling going into tonight — our team bond has gotten stronger and stronger throughout the year and it felt like everyone was ready,” Walin said.

They needed all of it to overcome archrival Western Albemarle, the team that nipped the Mustangs late in the regular season. The Mustangs managed to get the job done, winning 12-11 in the Region 4A championship, sewing up a home game in the state quarterfinals later this week.

Walin finished with five goals and an assist and Mallory did the heavy lifting down the stretch, hitting what became the game-winner with 3:14 to play while notching a second half hat trick. Mallory and Walin each had two goals during a pivotal four-goal run over a 2:05 stretch that transformed the game.

“We knew we had to come out with intensity, come out hard and fast,” said Monticello coach Langley Sloan. “That was message this whole time, a little bit more, a little more. This team feeds off that type of energy.”

Western appeared to seize control itself with its own four-goal run in the early stages of the second half, grabbing an 8-6 lead after trailing 6-4. Libby Carbo scored two of those goals and assisted on another while Mattie Shearer scored once and assisted on another. Carbo has emerged as as major threat for the Warriors down the stretch.

“It helps that we’re playing a little faster,” said Western coach Dana Boyle. “She’s a versatile player so she can drive or she can feed or dodge and that’s helpful for the overall attack.”

That run prompted a Monticello timeout with 18:08 to play, and from there the Mustangs got locked back in. The goals started pouring in, with Walin striking first before two by Mallory and then a Mallory feed to Walin to cap the spurt. The Mustangs won all four draw controls during that critical run on a night where each team grabbed 12 draws each, with Smith and Mallory snagging five each for the Mustangs.

Caleigh Smith finished with two goals and assist while drawing a lot of Western’s attention. That helped opened the door for Walin to get into a groove.

“She was ready to go tonight and she just completely went off,” Sloan said. “Other teams think they need to just look at Josie or just look at Caleigh but I have a bunch of threats down there and Meghan really showed that tonight.”

Kendall Smith and Allie Swartout also had goals for the Mustangs. Shearer finished with three goals and three assists for the Warriors while Carbo had four goals and two assists and Anna Kreienbaum scored twice. Kathryn Thomas helped keep the Warriors alive with 13 saves, including several critical ones that kept Monticello within Western’s reach in the closing minutes.

Both teams have gotten used to these battles that seem likely to tip either way, with this year’s three matchups decided by a total of four goals. For Western, the loss is frustrating, but their season continues on the road against Salem in the state quarterfinals laster this week.

“Every time we play this team, it’s back and forth, back and forth so I think it’s just who can break that cycle,” Boyle said. “Luckily, our season doesn’t end tonight.”

Monticello will take on Hidden Valley at home Friday or Saturday in the state quarters but winning this one was pretty sweet for the Mustangs.

“This was the biggest game of the season for us because we lost to them the last time we played, we couldn’t let it happen,” Walin said. “It feels amazing to be a senior and to be able to help the team out this much.”

Monticello girls lacrosse captains Becca Nordt, Kendall Smith and Josie Mallory talk about the Mustangs’ 12-11 win over Western to win the Region 4A title in First Off the Field presented by @PT_acac pic.twitter.com/mekZSIHqW5