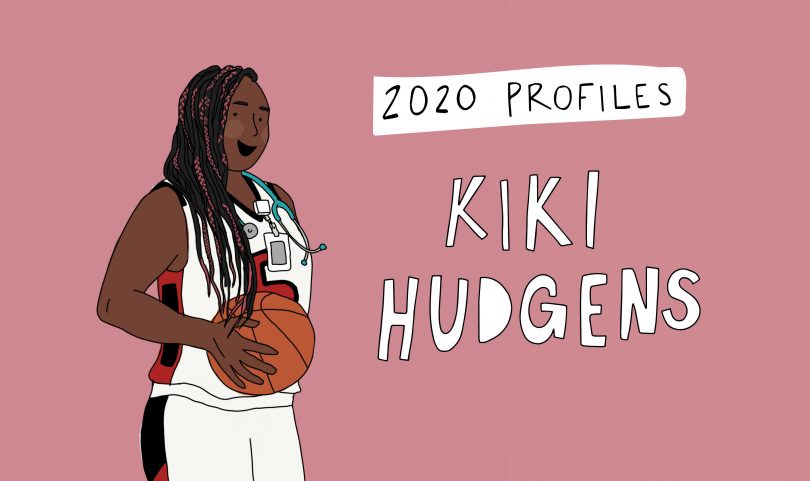 Our 2020 Profiles have focused on high school graduates in the class of 2020, but in this special installment, we’re profiling a college graduate in 2020, Orange County alum Kiki Hudgens, who has been on the front lines of the local COVID-19 pandemic fight.

Kiani “Kiki” Hudgens knows how to jump right in and do her part. That’s a big reason why she made an impact as a freshman for Orange County eight years ago, running the point for Orange and helping rebuild the Hornets’ program for the next four years, leading them to the program’s first region playoff win in nearly a decade.

That instinct to jump in and help is also why she’s making an impact now, working as a nursing tech at UVa, serving as part of a pool of nursing techs in the COVID-19 ward where she helps people entering and leaving the ward follow safe sterilization practices to help prevent further spread of the virus.

“There’s a certain protocol as far as how they remove it — putting it on isn’t really a big deal, but it’s more so taking off the scrubs that’s most important,” Hudgens said. “It’s actually interesting being a part of it when it first started. Nobody knew what to do and I didn’t know what to do and then I got trained. I think UVa is doing a really good job trying to minimize the spread and we were walking people through the process while people learned and adjusted.”

Hudgens extended her work as a nursing tech while putting the wraps on her nursing degree at UVa. Her fourth-year practicum at Mary Washington Hospital was canceled due to the pandemic, but that opened the door to continue working as a nursing tech at UVa in the run-up to her first job as a registered nurse at INOVA Hospital in Fairfax in labor and delivery.

Being forced to redirect to that role took Hudgens up close and personal with a COVID-19 patient and forced her into a period of self quarantine to keep her family safe.

“I saw a COVID patient in March and (before that) I was just like, oh it’s just the flu,” Hudgens said. “Then when you start seeing numbers and then I saw that patient, I was like this is not the flu. I didn’t go home for a month to see my family even though they’re in Orange — it made me more aware of the precautions I need to take. I’ve become more conscious of doing little things to make sure I’m not part of the problem.”

The fact that Hudgens is putting others first comes as little surprise to anyone who watched her play basketball. Hudgens was the 2016 Jefferson District Division 5 player of the year and led Orange with 16 points, nine rebounds and five assists in that region playoff win against Stafford. But individual stats and accolades never came first — she was much more interested in pushing the team to new heights.

She’s also become a de facto public health advocate within her own circle of influence because of her experiences at UVa. In particular, Hudgens’ grandmother has struggled with the stay-at-home suggestions, uncomfortable with being thrown out of her own daily routine.

“I had to tell her ‘you need to stay in the house,” Hudgens said. “I’m telling you this information because I love you not because I want you to be depressed or bored. And don’t go in the store and buy all the hand sanitizer, washing your hands with soap and water helps way more than hand sanitizer ever will.” 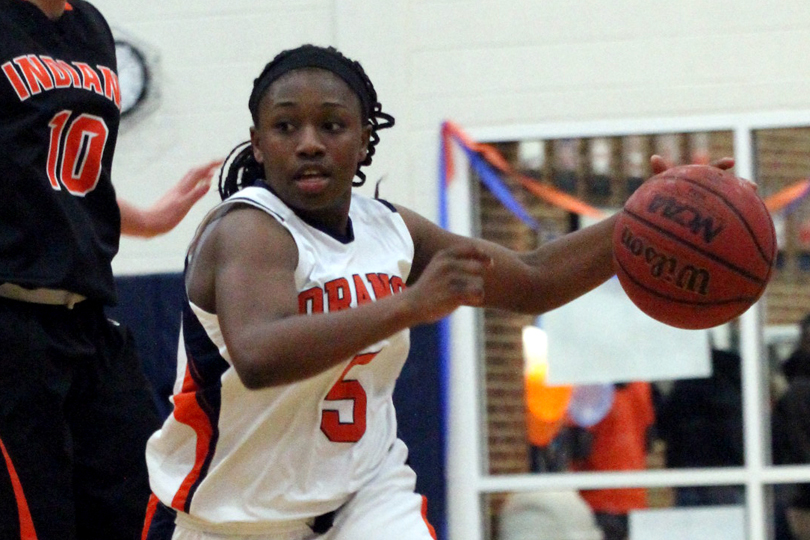 Kiki Hudgens playing for Orange in 2016, Photo from file by Grace Wilbanks

Like many local high school students, Hudgens celebrated her own graduation from UVa’s nursing bachelor degree program this year with a drive-by graduation. An interaction during that celebration with her former travel basketball coach prompted her to think about the lessons she learned from basketball and how she’s applied them to her work and academics, starting with working hard in everything you do, but that’s just the start for what Hudgens has pulled from her time as a basketball player.

There’s teamwork — particularly understanding everyone’s skill set and how to best use them in a certain situation, a critical part of working in medicine.

“On the basketball team, you have a point guard who’s good at dribbling — everybody has different things that they’re bringing to the table,” Hudgens said. “Realizing I may not be the best person at sticking someone — so maybe you should do this and I can do your job.”

There’s communication, something Hudgens as a point guard was particularly adept at on the floor. She was regularly a consistent voice of direction and encouragement for the Hornets.

“You have to communicate on the court,” Hudgens said. “The drills that my AAU coach did where you said ‘ball ball ball ball’ and ‘deny deny deny’ helped because communication is key in the healthcare field to prevent any errors or anything like that. Communication goes a long way.”

There’s accountability too — being okay with limitations like what you know and what you don’t know, and being willing to learn.

“Learning how to take criticism is a big thing too,” Hudgens said. “There are a lot of things I don’t know and it’s okay to not know everything. In basketball you may think you know everything, but your coach has played basketball for years and coached and they might know what more than you think you know. And you don’t realize that until it plays out.” 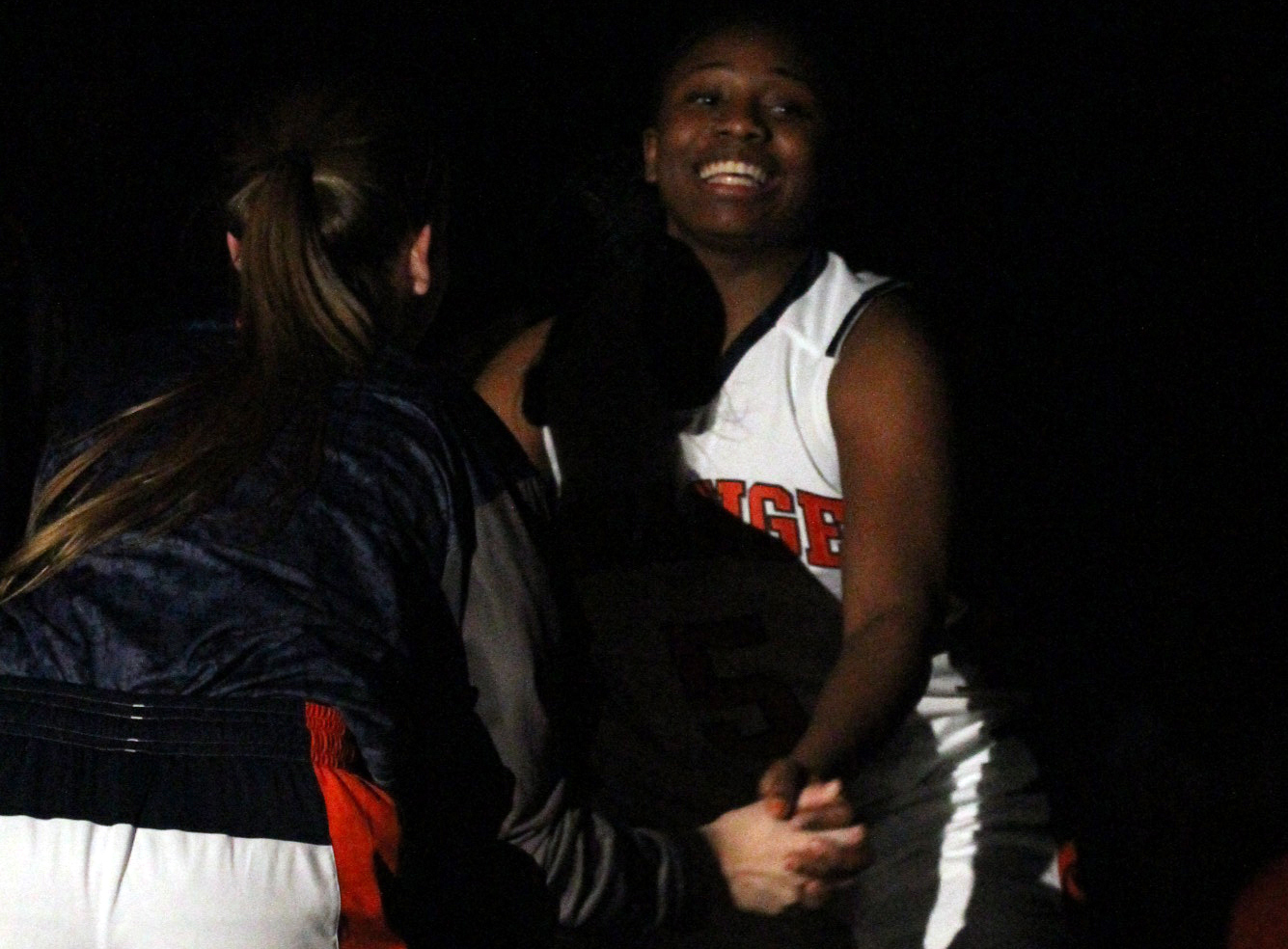 During her time working at UVa during a pandemic, Hudgens has seen an increased level of cooperation, teamwork and a familial atmosphere. For a lot of healthcare workers, their colleagues have become even more important to them than usual because of isolation measures. Even moments like sharing a pizza that was delivered has been an important time to bond.

“We have to have that camaraderie because that’s the only way we’re going to get through all this,”

We’re going to get through all of this too because Hudgens and her colleagues are going to get us through it. Because they’re going to do things the right way, work together, communicate and be accountable. Hudgens learned a lot of those lessons on the basketball court and she’s benefited from that experience, but we’re the ones benefiting now, living in a safer community because of her and her colleagues’ work.

Albemarle High is celebrating its spring college commitments via YouTube today. Here’s a...