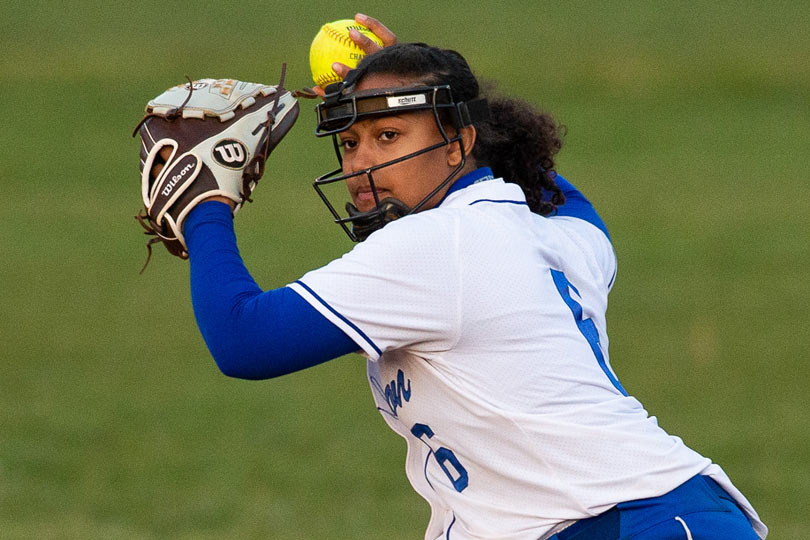 Madison County softball’s success is partially driven by how loose and relaxed the Mountaineers stay even in tight situations. In the last three years, Madison has rocked cowboy hats during state championship celebrations and traveled to the state tournament with a Stone Cold Steve Austin cardboard standup.

At the center of a lot of the Mountaineers’ jokes has been Hannah Johnson, a funny senior infielder who can dish it out but take it too.

“Her and her cousin Carrington Frazier, who are extremely close, they got into a little bit of an argument one day at practice and the kids were looking at me like ‘what are you going to do,” said Madison County assistant Jerry Carpenter. “And I was just like ‘it’s on, it’s on girl, it’s on’ and they all busted out laughing and we joked about that from that day forward.”

But in the last 14 months, it has been hard work and dedication rather than jokes that have defined Johnson’s existence. Johnson has spent the last year battling back from an unfortunately timed ACL and meniscus injury during basketball season in January of 2019 that kept her off the field her junior year and interrupted what was turning into one of the area’s most accomplished prep softball careers as she’d earned first team All-State honors as a freshman and sophomore.

There’s video evidence of Johnson hitting bombs at the Mountaineers’ brand new, spotless field in late February of this year. It was batting practice, but Johnson was raking, hitting homer after homer. She was just a few days away from getting the chance to knock one out of the park officially for the first time in 20 months when the spring cancellations in the wake of the COVID-19 pandemic dropped, ending Johnson’s prep career before she could enjoy the fruits of months of rehabilitation and work on the diamond.

“When they initially postponed I was okay with it,” Johnson said. “I thought this two weeks will go by and we’ll go right back to playing. (But after they announced schools were closed until the end of the year) I cried. I was really looking forward to getting back on the field and playing with my teammates. It hurt. I’ve been playing with these girls and against these girls since I was eight years old.”

Johnson is part of a sterling eight-member senior class that went 69-6 over their three seasons. Several of those seniors played critical roles in the Mountaineers’ state title run in 2017 as just freshmen. Johnson hit .409 with 25 RBI while blasting five home runs in that ninth grade campaign while classmate Emily Seale shared time in the circle with then sophomore Logyn Estes who earned Class 2 state player of the year honors that year. Add Bailey Smith, Amy Deane, Sophia Adams, Morgan Clark, Cassandra Smith and Abi Tanner to Seale and Johnson and you’ve got what is one of the most formidable softball classes in Central Virginia history.

The Mountaineers were on a similar track in 2018 with Johnson hitting .348 with 26 RBI and 7 homers when they fell in the region finals to Page County and then got upended by King William in a stunner in the state quarterfinals. Even with Johnson on the shelf last year, Madison made a third-straight run to the state tournament with some help from Johnson’s classmate Smith’s “rear back and smack it” approach in the region semifinals that led to a walk-off homer and a tournament berth. After losing in the region final, Madison beat Amelia and then Lebanon in the quarterfinals and semifinals before falling to Richlands 1-0 in the state final.

Falling just short in the title game gave Madison’s seniors some serious motivation coming into this year, a chance to book end their career with state titles. For Johnson the fact that she missed out on last year’s run — and perhaps being a difference-maker in region or state title losses along the way — combined with proving she could come back stronger than ever meant she was extremely motivated.

The road back had been excruciating after all. Another potential bite at the state tournament apple had kept her fueled.

“I knew I was going to have to put in a lot of work,” Johnson said. “Even before my surgery, I had to wait a month so we could make sure we got the best surgeon. When I went in and had surgery, I couldn’t even lift my leg a centimeter off my bed because all the muscle was gone.”

After recovery, Johnson had to re-learn how to walk and then slowly progress into strength training and rebuilding the leg as part of a long process, complicated by the meniscus injury being paired with the ligament tear.  She put in the work with guidance from Ashley Currier and Miranda Phillips at the Powell Wellness Center.

“We did lots of one-legged squats,” Johnson said. “I re-learned how to run. When I started doing sports movements, I got tendonitis and I had to push through that pain. In October, I really took off.”

She had a lot of encouragement along the way from teammates, Carpenter, Jesse Yowell and her summer travel softball coach Travis Estes among others. When you’ve been playing a sport as long as Johnson has been in one place like Madison, a lot of people are invested in your devel+opment.

“Hannah came on as a freshman, it was my first year coaching and I thought right then she had the potential to be as great as she wanted to be,” Carpenter said. “She was a five-tool player, she could hit, run, throw, the whole nine yards.”

Not getting to play her junior year definitely negatively impacted Johnson’s recruiting progress, and playing softball in college has been a goal since pretty early on for her. She’s continuing to work toward that goal, keeping her options open and hoping to find something in the coming weeks.

For now though, she can take satisfaction in the work she put in and the memories from her freshman and sophomore years like stealing snacks from each other’s hotel rooms at states to playing with her cousin Carrington Frazier or close friend Meadow Anderson, now at Fairmont State. Even if it ends with some thoughts about what could’ve been this year, it also ends with a family forged on the field.

If Johnson’s drive and work ethic during the offseason are any indication, this won’t be the last we’ve heard from the hard-hitting, defensively sound infielder.