Orange’s Isaiah Coleman-Combs won his first round match over Hickory’s Connor Wallace 8-7 at 120 pounds and fell in the semifinals to Cam Timok of Hermitage. He’ll start his consolation run today.

Jordan Grimsley of Albemarle lost by major decision in the opening round at 126 pounds and bounced back with a win an 8-3 win in the consolations. He’ll continue his tournament today against Adam Wilmer from Matoaca.

Orange’s Bruce Schlegel fell 8-3 in the opening round of the 152-pound class and dropped another tough match in the first round of consolations.

Charlottesville’s Wade Kammauff, at 170 pounds won his first round match 7-1 over Jordan Garlow of Smithfield, then fell in the semifinals. He’ll wrestle for fifth Saturday.

Louisa’s Gavin Tingen won his first match at 160 pounds before falling in the semifinals. He’ll wrestler for third place today.

Louisa’s Jeffrey Sisk won his first match at 113 pounds 5-2 before losing in the semifinals. He’ll wrestle for third place today.

Monticello’s Ryan Brown lost his first match at 138 pounds to B.C. Laprade of New Kent. He then battled back to setup a chance at third place today with a 9-7 overtime win the consolation quarterfinals and then an 11-5 victory over Isaac Diehl of Fort Defiance.

Andrew Dickerson of Western Albemarle won his opening match at 113 pounds 7-3 over Jackson Gray of New Kent, then fell in the semifinals to Brentsville’s Jeffrey Walker. He beat Lord Botetourt’s Sam Ring in the consolations to set up a third place match Saturday.

Western’s Chris Miller won his opening match 4-3 over Jacob Ingham of Central-Woodstock before falling to Poquoson’s Ross Graham in the semifinals. He then won 8-3 over William Byrd’s Randy Wendell to give himself a chance to wrestle for third today.

A pair of Madison County wrestlers, Jacob Welch at 132 pounds and Derek Rakes at 195 pounds will wrestle for third place today. 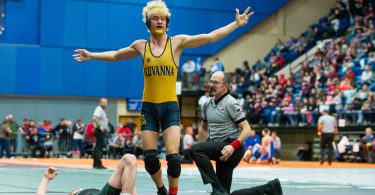 There aren’t many more daunting paths to the podium than trying to wrestle back after losing...