Connor Shellenberger had been held scoreless all first half of St. Anne’s-Belfield’s senior day clash with Woodberry Forest on Friday afternoon.

But the UVa commit flipped a switch in the second, registering a game-high five goals while helping the Saints keep the Tigers at arm’s length in a 15-9 win in which STAB never trailed.

The Saints scored the game’s first four goals, courtesy of four different players, before Woodberry’s Dawson Chitwood broke the ice with a rip past STAB goalie Noah Kurtz with 1:23 to go in the first.

“We got off to a quick start, our offense was clicking early and our defense played well,” senior Emmett Barger said. “We really came out after halftime and turned it up.”

Trent Moran, who had a goal as part of the opening barrage, netted two more to open and close the scoring in the second period as STAB took an 8-4 lead into the break.

The Tigers were plagued by an inability to win draws, with STAB holding a 9-5 advantage in the first half and 18-11 for the game.

“Draws are something we’ve struggled with throughout the year,” STAB coach Bo Perriello said. “Jago Gould, our faceoff guy, gave us some early possessions which led to some goals.”

After Mack Daniels opened the scoring in the second half for the Tigers, Shellenberger got his first two tallies, each from nearly the same spot on the field, and Moran fed Gunni Horridge with six minutes left in the third to push the lead back to 11-5.

Woodberry again pushed back, getting consecutive goals from Daniels, Bennett Hudson and Taylor Tucker, but Shellenberger got his hat trick with 1:04 to play and STAB led 12-8 after three.

He wasn’t done. Shellenberger struck twice more in the fourth, the final tally with 4:52 remaining to all but ice the victory for the Saints, who were adept at bleeding the clock in the final stanza.

“We started moving the ball better and our defense helped us out,” Shellenberger said. “When we move the ball, the shots come.”

Moran tallied four goals and two assists while Horridge added two goals of his own, while Michael McGraw had four assists for the Saints. Daniels and Colin Kovacs led the way for the Tigers with a pair of goals each. Sophomore goalie Wyatt Martin had nine saves for Woodberry.

“This is a foundational class for us,” Perriello said. “They’ve invested a lot in our program, gotten the success they were looking for, and I’m happy we got to send them out with a win today.”

STAB will travel to play Collegiate in its final game before postseason action. 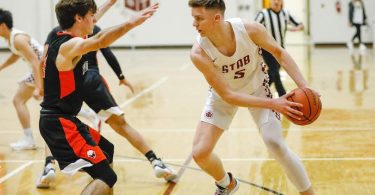 By Drew Goodman / Scrimmageplaycva.com contributor   For a team that prefers an up-tempo game...