When playoff time comes around, stepping up to the challenges of each game can be a daunting task in itself.  When you’ve dealt with the rash of injuries Albemarle boys basketball has, that can be a particularly difficult challenge.

Albemarle has adjusted as well as they can and placed an even higher importance on playing as a team in the wake of those injuries and it paid off in a 58-50 first round victory over Brooke Point in the Region 5D tournament.

“We have to score by playing well as a team and we’ve got to play great defense as a team,” said Albemarle coach Greg Maynard. “That’s the two things we need.”

In the first quarter, it was a rather slow start for both teams.  The defenses gave the opposing offenses fits, which resulted in the Patriots taking a 9-6 lead into the second quarter.

The Patriots expanded their lead in the second however, finding offense from multiple sources.  They got out to a 15-9 advantage, but Brooke Point began to fight back, going on a 6-0 run, and the game headed to the half in a 21-21 tie.

“I thought our defense was pretty good in the first half and was keeping us in the game,” Maynard said. “We weren’t executing on offense at all, and when you get a lot of foul trouble sometimes you’ve got some combinations out there that weren’t clicking, and then we started executing better in the second half and I think that helped us pull away.”

The second half was kind to the Patriots, as the offense began to click, assisted by some defensive intensity, creating turnovers and turning them into transition buckets at the other end. Cam Johnson played a large role on both ends of the floor in that regard, and put up five of his team-high 14 points in the quarter. Kywan Washington also had a big performance for the Patriots with 10 total points, while Will Hornsby also had 10 and 7 rebounds.  The offensive execution and the stifling defense allowed the Patriots to take a 42-36 lead to the fourth, and the game never got much closer than that.

In the fourth, the Patriots kept up their defensive intensity, not allowing easy shots and creating turnovers.  The team was firing on all cylinders in all facets of the game in the second half, and it showed on the scoreboard.

With the win, the Patriots will look forward to hosting a Region 5D semifinal matchup against William Fleming Tuesday night. 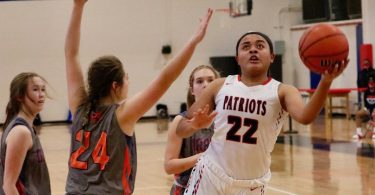 Anyone that has attended an Albemarle girls’ basketball game over the years will recall hearing AHS...

Less than 24 hours after their loss to Western Albemarle on Friday, Fluvanna’s boys basketball team...