Thanks to Emily Seale, that was all they needed.

The Mountaineers used three singles in succession and some heads-up baserunning to push across a run in the bottom of the third and Seale struck out 11 batters to make it stand up in a 1-0 win to send Madison through to the semifinals and a chance to play for a spot in the state tournament.

After Wilson starter Jaya Diggs matched Seale through two, Madison got a one-out single from Emilee Daniel, who promptly stole second on the first pitch to Morgan Clark. The second was a passed ball, allowing Daniel to take third.

“When we aren’t hitting well, we try to manufacture runs any way we can,” Madison coach Jesse Yowell said. “We’ll get aggressive on the bases. It took a while but we made some adjustments on offense.”

Clark followed with a swinging bunt and Daniel beat the throw home. Clark was retired trying to stretch the hit to second, which was fortunate for the Hornets because Logan Estes singled to keep the inning going. But Madison could do no further damage.

It didn’t matter. Seale carried a perfect game into the fifth, losing it when Ariana Clements singled to right with one out in the fifth. But the Mountaineers caught pinch-runner Madison Schaeffer trying to steal second.

“Emily did a great job in the circle. She kept them off-balance,” Yowell said. “We knew they could hit, so she just needed to work it around a little. I knew what she’d been doing the whole night was going to continue.”

Wilson’s only other baserunner came when Korinne Baska singled with two outs in the seventh, but Madison’s Bailey Smith made a backhanded play on the next batter to get the force at second and end the game.

“I had just about everything working tonight except my changeup,” Seale said. “But that’s usually on and off. And it’s nice knowing I have a good defense behind me.”

Madison will welcome Buffalo Gap on Wednesday evening at 7:00 with the winner advancing to the state tournament. 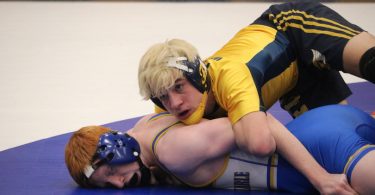