In a season where games can be cancelled hour-to-hour, teams are had pressed to find quality opponents to prepare for the playoffs looming only a couple of weeks away.

To make up for some lost games and get ready for a potential playoff run, the Charlottesville’s boys squad scheduled two perennial power programs this week, starting off with a road trip to East Rockingham Wednesday night.

The Black Knights played well through three quarters despite a tough offensive night, but ultimately fell to the Eagles 63-47 for their first loss of the season.

CHS started off well, Nick Motley played superb defense on 2022 star Tyler Nickel most of the first quarter and took a 13-8 lead after one. Charlottesville caused numerous turnovers thanks to stifling half court defense.

The Eagles regrouped and held Charlottesville to eight second quarter points. Nickel scored at the buzzer to take a 23-21 lead into the half.

Charlottesville took the lead at 26-23 with 6:06 left in the 3rd, but East Rock promptly ripped off a 10-2 run, spearheaded by Cooper Keyes. The junior guard nailed four threes in the third and took a 39-34 lead into the fourth.

Charlottesville couldn’t get into a rhythm offensively in the fourth quarter and the Eagles knocked down free throws down the stretch to give them a comfortable lead. CHS was held to 2-19 shooting beyond the arc and the Eagles held Zymir Faulkner to 3-for-14 shooting for only eight points.

For Charlottesville, Christian Stewart had 12 points and 11 rebounds, and Nick Motley added 9.

Charlottesville drops to 3-1 to start a huge week where they host Albemarle Friday, then GW-Danville comes to town Saturday in another non-district matchup. 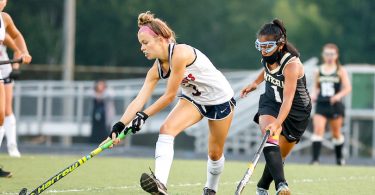