The last time the Fluvanna softball saw Katherine O’Connor and Monticello, they were dealt a no-hitter and a 1-0 loss.  Thursday night, unlike some other points in this season, they got the bats going in a big way as the Flucos rolled 10-0 over the Mustangs.

It started in the first inning as Calista Marsh set the tone early in the circle, pounding the zone and trusting the Fluco defense behind her.  She pitched a scoreless first, on her way to throwing a complete game shutout.

Then in the bottom half, it was Karly Hance that reached base on a two-out triple, before getting the Flucos on the board by scoring on a wild pitch.  Hance went on to end the night going 2-for-3 with two triples and three runs scored.

In the bottom of the second the Flucos added to their lead, as Brooke Napier led off with a double and then scored on Makayla Gentry’s sac bunt and a throwing error at first.  But that wasn’t the end of Napier’s huge night. In the third, she came up again and blasted a three-run homer to left that broke the game open at 5-0.

“I was just so ready to go up and hit the ball after the first time I hit, and then felt that one off the bat and it felt amazing,” said Napier, who ended up a triple shy of hitting for the cycle going 3-for-3 including the double and the homer.

After that swing, all the momentum was in the Flucos’ corner and they never took their foot off the gas.  They scored three more runs in the fourth on a two RBI triple from Calista Marsh and an RBI single from Braelyn Via to make it an 8-0 ballgame.  Then the Flucos ended it in the bottom of the fifth on a pinch-hit homer from Heidi Breeden and an RBI triple from Santrice Rush that ended the game at 10-0.

The Flucos will look to keep things going as they host Charlottesville on Tuesday, while the Mustangs prepare to travel to Albemarle the same night. 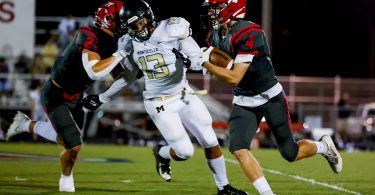 In the second quarter of Thursday night’s rivalry clash between Albemarle and Monticello...