A total of six local wrestlers are still in the hunt for a state title after day one of the VHSL wrestling championships in Fairfax and Salem.

Louisa County has a pair of wrestlers in the Class 4 tournament in Fairfax that will wrestle in today’s semifinals as Louisa’s Owen Grislick will compete at 106 pounds after winning his first round match 10-3 and his quarterfinal bout 6-0. The Lions’ Austin Mills is also making some noise at 152 pounds where he won his first match 11-7 and his quarterfinal clash 11-0 to advance to the state semifinals.

Orange County also has two wrestlers in contention for a championship with David Steigler at 138 pounds and Chance Bowers at 160 pounds both a win away from a title match. Steigler won his first round and quarterfinal matches with pins while Bowers pinned his first opponent and then won 8-4 in the quarterfinals.

Albemarle’s 220-pounder Donovan Berry is also battling it out for a shot at a title after winning his first match 2-1 and his quarterfinal match 5-4 to grab a spot in the semifinals.

Meanwhile in Salem, Madison County heavyweight Jacob Sacra got a bye in the first round and then pinned his quarterfinal opponent in 11 seconds to advance to the state semifinals in Class 2.

A handful of other local wrestlers still alive in the consolation brackets too. In Class 4, Louisa’s Zion Vilines is still fighting back at 120 pounds. In Class 5, Orange’s Wyatt Mills is alive at 106 pounds,  Albemarle’s Rafael Galvez is alive at 113 pounds and Orange’s Truth Wilson is alive at 220 pounds. 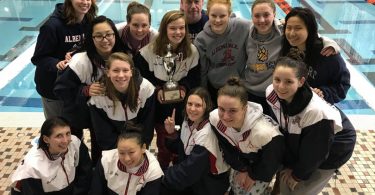 Albemarle’s boys swimming rolled while the girls’ squad needed just about every point...